The ultimate purpose of the Portland Wastewater Treatment Plant (WWTP) is to protect the public and the environment from the harmful effects of raw sewage generated by those living and working in the City of Portland. This is accomplished by treating the raw wastewater to a degree that minimizes any harmful effect to the Grand River or the environment. In fact, the solids by-product (Biosolids) is useful as a fertilizer and soil conditioner to farmland. The City is committed to bringing together the various resources necessary to accomplish this mission.

The Portland WWTP was first built in 1958. Prior to that, the wastewater generated by the City dumped directly into the Grand and Looking Glass Rivers. The original facility, a primary type treatment plant, provided only 40 to 60% solids removal and very little suspended organic matter removal. In 1973, the City, with the help of Federal grants, upgraded the facility to a secondary treatment plant. This was done by adding biological treatment. Biological treatment effectively removes the suspended organic matter and dissolved solids that remain after primary treatment. Currently, the WWTP removes about 95% of the incoming solids and organic matter and 85 % of the phosphorus. Ultra Violet (UV) disinfection takes place prior to discharging to the Grand River.

In 1986, Earth Tech was contracted to manage the WWTP facilities. The  Portland WWTP remained under contract with Earth Tech until June of 2006. At that time Lonny Freed, an Earth Tech employee, retired. Doug Sherman, a City employee, possessed the necessary qualifications and was promoted to the position of WWTP Superintendent. As a result, the City was able to resume operating the WWTP.

In 2011, the Portland WWTP was able to obtain funding through the USDA Rural Development to undergo additional plant upgrades. These upgrades were completed in April of 2012.

In 2018, with the retirement of Doug Sherman, the City decided it was appropriate to contract the operation of the WWTP. Following the RFQ process, these services were contracted to Fleis & VandenBrink Operations under the direction of Ken Dey, one of their Senior Project Managers. 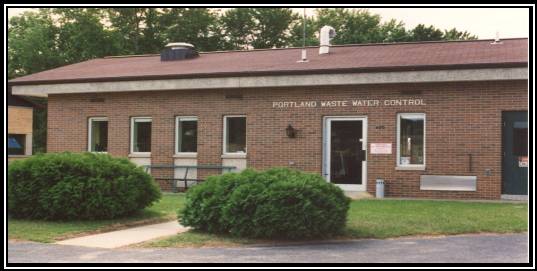